An Ode to Rajendra Sahni 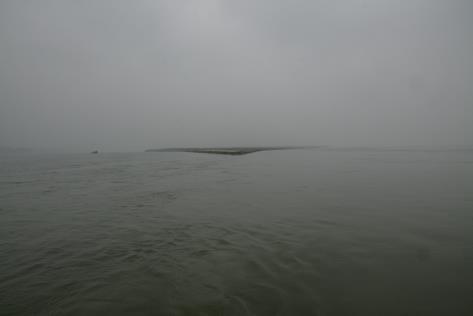 Gangaji, as Patna residents refer to her in reverence is like a gentle sea

The Ganges River Dolphin, a unique river dolphin species in the world is limited toÂ the Indus, Ganga-Brahmaputra-Meghna, and Karnaphuli-Sangu river systems of the South Asian. Categorised as Endangered by the IUCN Red List of Threatened Species (International Union for the Conservation of Nature) it is also India’s national aquatic animal. It is highly threatened by deterioration of river habitats due to pollution, pesticide run off, dams barrages, poaching and incidental killing, wherein the dolphins get trapped in fine nylon nets while chasing fish.

The Ganges River Dolphin had me fascinated. In Patna for some work, I decided to take an extra day with the hope of seeing one. An internet search had led me to an article announcing Bihar Tourism’s Dolphin Boat ride, I landed up at the Bihar Tourism Office, it was a bit early and the office was barely populated. We’ve closed down the boat rides due to lack of response, an officer looking deeply into his computer told me. Even otherwise you have to get in touch with the only one boatman who can show you dolphins at least a day in advance, and the officer who has his number is absent he added. A slew of little requests and a determined officer at the Bihar State Tourism Development Corporation got me the number of this legendary boatman, Rajendra Sahni. 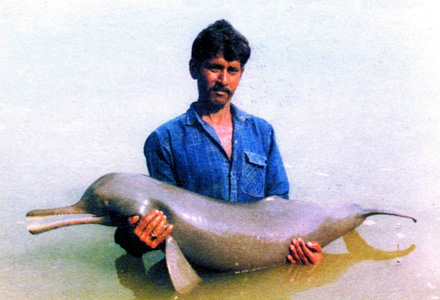 A phone call was made and a meeting was fixed for 2pm, Gandhi ghat. The Dolphin is a wild animal, I will try my best to show it to you, we will spend 2 – 3 hours, as much time as is needed, but there is no guarantee, I hope you understandâ€. No problem Sahniji, I will be happy just to be out on Gangaji.
In Patna everybody addresses this mighty mythical river as “Gangaji”, though in reality other than a few ghats, the river is mostly the backyard and dumpyard of the city, revered and abused in equal measure. As the diesel engine on his boat chugged, the mighty river, its expanse, immensity, gentle flow and quiet power took over. The best place to see dolphins is at the confluence of the Gandak and the Ganga, but you sometimes see them almost anywhere Sahni told me as he kept a keen meditative lookout. We talked about the mighty Ganga, the dolphins, about his life, the powerful Gandak that forces its way down from the Himalayas to meet the Ganga, The force of the Gandak was such that we would hear its roar over all the sounds of this land. And then as we turned to enter the main course of the Ganga with the massive Gandhi bridge as the backdrop… he saw one, I missed it, I was taking notes! 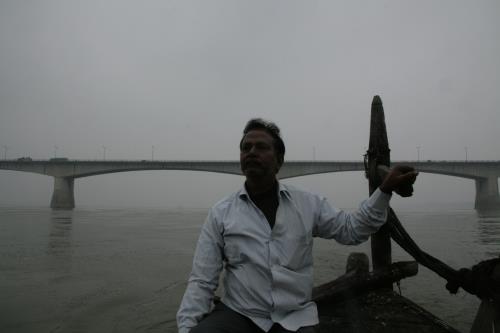 Sahni navigates the Ganga like nobody else, knowing every nook and turn, every ebb and flow

Rajendra Sahni, has an encyclopaedic knowledge on the dolphin, the Ganga, its tributaries, all of which he has surveyed, sometimes for weeks at a stretch as part of a small dedicated group of researchers led by Professor R K Sinha. It was about 30 years ago, at the age of 22 that he first got pulled into a dolphin research project. R K Sinha, was mobilising a team to carry out a survey and Sahni along with a couple of other fishermen joined the team. Sahni has since been a companion and guide to generations of Dolphin researchers and is fondly remembered by the Dolphin scientists I talked to. He comes from an ancient lineage of fishermen on the Ganga, We have been fishermen ever since I know and though he continues to fish, his main source of livelihood comes from patrolling the river during festivities and from diving to fish out dead bodies, either murdered and dumped or those that have committed suicide. A sought after diver, his moment of glory was when he got a state medal for rescuing three women who had accidentally fallen into the river and were drowning, he proudly displayed his visiting card which says, gothakhor (diver). Solicited by the police and the Patna administration, he and his team, which can at times be of upto 100 men will be patrolling 32 ghats during the upcoming Karthik Chhath Pooja. These are very demanding and tense jobs but I don’t even get money worth wiping my sweat. Even an unskilled labour on a construction site in Patna gets paid Rs 300 for a day’s work, whereas for a highly risky and a highly skilled technical job my daily wage is Rs 249 and that too at the mercy of department officers. I have trained in Kolkata on a submarine, even a good small one would make our jobs so much easier, but Patna does not have one. So everytime we go hunting for a body we risk our lives. Who will speak for us, we fishermen are not literate, we do not have any union, nor any leader 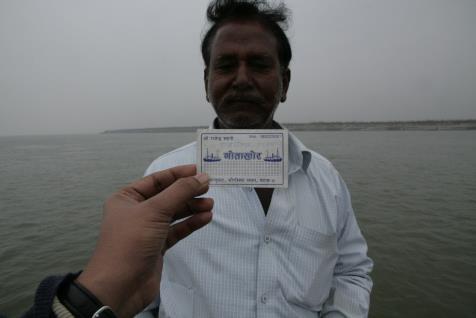 An expert diver, Sahni has saved numerous lives and recovered even more dead

Dr. Gopal Sharma, a scientist with Gangetic Plains Regional Centre, Zoological Survey of India, Patna told me that Rajendra Sahni is in a league of his own. His knowledge of the Ganga, its meanderings, its geo-morphology, its fish, its dolphins is legendary. He is highly respected by the community of river fishermen and is a highly reliable source of information, who has unfailingly reported dolphin sightings, deaths, young ones. Always ready to leave whatever he is doing when there is dolphin related work, he has readily taken research teams at a reasonable price on their boat journeys, cooks for them, often displaying great courage on the river whether it is camping out on remote stretches along the river or taking on Dolphin rescue and release. There have been atleast 3-4 occasions when I got kidnapped along remote stretches of the river while doing Dolphin work. But, you know I speak the same language and it didn’t last more than a day Sahni told me.

Dr Sharma aptly summarised, There are a few others like him 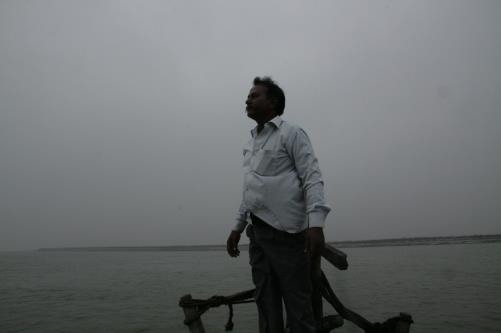 Intensely scanning the vast river for any sign of the Dolphin

That day after some more meandering closer to the Gandak Ganga confluence we saw a number of dolphins as they came up for air and sometimes for a more spectacular jump. As the sun set and drizzly clouds and a chilly Ganga breeze took over Sahni, still keeping a steadfast keen lookout over his Gangaji brought me back to the Patna shores.

It is thanks to people like Rajendra Sahni that some of our precious wildlife lives on. He asked me to share his no. 9852235261, saying that he would be happy to take people onto the river and show them Dolphins.Â  Ideally give him a days notice (I managed an appointment in 2 hours). He speaks hindi and the best time to see dolphins is early in the morning, or late afternoon about 3 pm onwards. 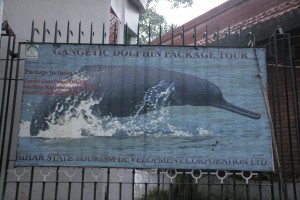 A Dolphin package tour that never took off, though with Sahni at the helm and luck on your side, dolphin sightings light up your day

Peeyush Sekhsaria
a shorter published version of this piece can be seen at http://www.thehindubusinessline.com/features/blink/takeaway/the-boatmans-calling/article5900820.ece

This entry was posted in Uncategorized. Bookmark the permalink.